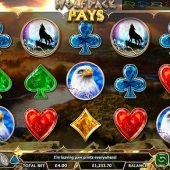 There was me thinking that only IGT had mastered the art of making a slot game featuring wolves. It turns out that NextGen Gaming aren’t too bad at it either. The 5 reel, 243 ways-to-win Wolf Pack Pays is testament to that. The game has been cleverly designed, with the symbols seemingly floating on pristine landscape which is home to the wolves and eagles that appear on the reels.

Along with wolves and eagles and stacked Wolf Wilds, you will find hearts, diamonds, clubs and spades, all of which are intricately designed. Something else which is a key element of this game is the sounds. They fit nicely with the games theme and escalate as you progress through a feature.

On a Roll feature

WolfPack Pays has a unique feature called ‘On a Roll’. This works by awarding a free re-spin for any win in the base game. Wolf Wilds are then accumulated through the feature. After 1 win - Wolf Wilds will appear on reel 3, after 2 wins - Wolf Wilds will appear on reels 2 and 4. If you manage to keep your winning run going to 3 wins then you will get Wilds appearing on all reels. Should you go on to get 4 wins in a row then you will trigger the Free Games feature. You can see how your progressing in the top right hand corner where there are four wolf icons that break into a run as you progress.

Unlimited Free Games for the Wolfpack

Once you have triggered the Free Games, as described above, you will receive 3 wolf paw tokens. A paw token will disappear each time you fail to get a winning line. The feature ends when you run out of paw tokens. This feature can be over fairly quickly if you unlucky, however it does get triggered quite frequently if you are playing this game for a while.

I am really impressed with Wolfpack Pays and it is a clear sign that NextGen Gaming is growing in ability to produce exciting and enjoyable slot games. The clever use of sound to build anticipation in this game gave me the feeling of a wolf pack gathering momentum in a hunt. That I believe is a key component in this game and allows Wolfpack Pays to be considered amongst some of IGT’s Wolf-themed slots such as the superb Wild Wolf and the hugely popular Wolf Run. A slight downside to Wolfpack Pays is that it seems to be a fairly low volatility slot (regular wins, smaller payouts), which isn’t always my thing. However, I would still return to this game regardless of this as it is very entertaining. 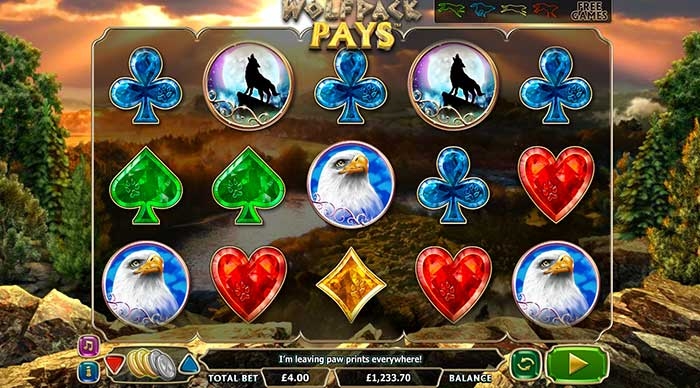