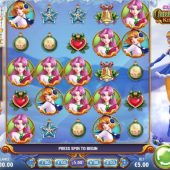 Moon Princess Christmas Kingdom slot by Play'n Go is simply the Xmas version of their old Moon Princess grid slot. It isn't actually a clone of it, but a copy of Sisters of the Sun slot, another 5x5 game of theirs. So get the old mechanic here which started with Energoonz slot and around the same time Cloud Quest slot. This means the same juvenile cartoon Hentai appearance, soft music and inane interjections from the characters as before but over a snowy background for stunning originality. So can we see some royal wins here or will the moon be hidden behind clouds this Christmas?

On the grid...
The usual 5x5 grid appears here where you need lines of 3-5 tiles and winning symbols are not replaced, with non-paying ones falling in their column to hopefully make new combinations on Moon Princess Christmas Kingdom slot. There are special symbols to reveal in the vacated positions for modifiers etc. which we will come to shortly. Any 3OAK wins create a Wild in place of their centre tile and the 5-of-a-kind pays are: Sun Wild 30x bet, all 3 Princesses 10x, mixed Princesses 5x, Bell or Star 3x and the Baubles 2x. If your win reveals one of the 5 Mistletoe on the grid you get a 1x multiplier for the round for each time it happens, so 6x is possible. As usual with this formula we can get some random modifiers when the Princess on the right activates.

Girl Power
After any losing spin a Princess can randomly appear to award her power:
Storm - removes 2 sets of symbols.
Star - awards 1 or 2 Wilds.
Love - converts one set of symbols to another.
What The Fox - Fox scatter randomly added at the end of a play.
Trinity - land a single Fox to get a free re-spin with all 3 of the Girl Powers activated in sequence. Clearing the grid during this awards the free spins by the way but not the Clear Grid award explained below!
Clear Grid - in a normal spin but not Trinity, this will add 50x bet to your win.

Free Spins
Choose the volatility here after the trigger when clearing the grid during the Trinity feature. The multiplier is never reset so can only increase and Mistletoe goes from 5 to 10 behind the grid. Opt for a Girl Power to be active throughout on each non-winning spin:
Storm - 8 free spins with each Fox during them adding +2
Star - 5 spins with +3 for any Fox scatter landing in the round.
Love - 4 spins with +4 spins for any Fox landing.
The most you can play is 150 spins and we are told 5,000x is possible - as usual.

Our View...
Moon Princess Christmas Kingdom slot gives 96.20% maximum RTP but it can be as low as 84.21% if the casino uses one of the lower maths options! The game isn't boring as it's a copy of another which isn't. Stands to reason. It has reasonable sounds and animations sounds for the theme but is nothing extraordinary. The base game multipliers from the Mistletoe symbol help your balance out as do single Fox for the Trinity sequence, in addition to the random Girl Power modifiers. Free games aren't easy to hit here and when you do you really need the Fox for extra spins to have a chance of good result via the climbing multiplier. A clone is a clone though and I for one wouldn't appreciate the same present as last year under my tree, even if the wrapping is different...