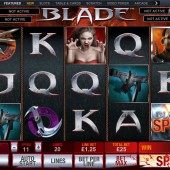 The Blade comic book series has been popular with fans of the Marvel Comics since the vampire hunter made his first appearance in July 1973 in a comic called The Tomb of Dracula. Thanks to a deal Playtech agreed with Marvel Comics, Blade now makes the transition to online slot gaming, along with Fantastic Four and the hell-raising Ghost Rider.

This Blade slot is based on the comic book series as opposed to the hit movie franchise starring Wesley Snipes.

It is a 5-reel, 20-payline slot title that has all of the iconic imagery from the comic book series included as symbols such as a Female Vampire, Machine Gun, Silver Spikes, Bladerangs and EDTA Darts.

The main bonus feature in the game is the Blade Free Spins Bonus. This is triggered when you hit three or more Blade Logo scatter symbols across the reels.

Another intriguing feature included in Blade is the Blade Split feature. The Blade Split symbol only appears on the fifth reel and when it does appear the last symbol in a winning combination on that spin splits in two and effectively becomes two separate symbols to increase the win amount.

Blade is also included in the Marvel Multi-Level Progressive Jackpot which can be won by any player at any time playing on one of the Marvel slot games released by Playtech.

Blade is another Playtech Marvel comic release that plays in a similar way to the high intensity Elektra and the action-packed Iron Man 2 slot but it is very much an attractive slot in its own right. Fans of the Blade comics and movie will love it.