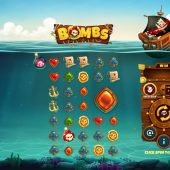 Bombs slot by Playtech is their first attempt to join the grid cascade series which began with Play'n Go's Gemix and has since spawned numerous others including Red Tiger's Tiki Fruits and Relax Gaming's Temple Tumble. Here we have a cartoon pirate theme where the sound is of the wooden ship's wheel turning mixed with cannon fire and shouts as bombs are fired into the ocean. The reels are transparent and are below the surface of the water for reasons we'll discover, so will these bombs be blowing our bankroll out of the water too?

Bombs slot has 5 reels of 7 rows each and remarkably only costs 20 coins to play as there are only 20 fixed pay lines! Symbols are stacked including Wilds and you even get some landing as 2x2 block icons too. The 5-of-a-kind pays are 20x for Wilds in the form of a Treasure Chest, Redbeard 10x, Anchor 6x, Gold Coin 5x, Map 4x with four card suits offering either 1.5 or 1x. There are Red Skull scatters which can appear anywhere on the grid which activate features in quite an odd way!

You have a pirate galleon to the above right of the grid occasionally firing different kinds of bombs into the water on the left of the grid. If you choose to pay 2.5x bet or 50-coins per spin you get another pirate galleon so more bombs launched. This can be important as these bombs sink down into the ocean one row at a time over the subsequent 7 paid spins. You may well have worked out by now that these bombs will activate if there's Red Skull scatter on the same row as they descent to the bottom of the ocean. The various scatters offer:

10-Bomb - awards a win of up to 10x bet.
Pink Wild - 5 to 10 random Wilds placed on the grid.
x10 - a multiplier, can bet 2 to 10x which applied to all wins on the grid.
Yellow Skull - detonates all bombs on the grid at once.
Pink ??? - can become any of the various bombs randomly.
Free Games - you will be awarded 10 free spins during which more bombs tend to be fired and can retrigger up to 6 times.

Bombs slot is a bit childish but nevertheless quite fun to play with a reasonable win potential despite the low volatility. If you look closely it's really an elongated version of Netent's EggoMatic slot with the same amount of lines and scatter enhancements by the reels. The graphics and overall sounds and appearance could be better and the RTP is 95.63% playing 20 coins and one ship or 96.83% for playing 50 coins and having two ships. It's not bad for Playtech's first attempt at the mechanic although it's very odd having only 20 lines on a 5x7 grid! Whether Bombs slot well, shall we say, bombs with the players only time will tell...