The Three Musketeers and the Queen’s Diamond slot

The Three Musketeers and the Queen’s Diamond slot review 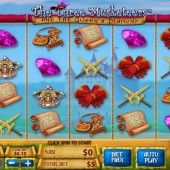 Based on the classic Alexandre Dumas novel - The Three Musketeers (yes, the title is a bit of a giveaway) but given a very 21st Century comic twist - developer Playtech's new slot is a riot over 5 reels.

Three Musketeers and the Queen's Diamond has a nice 3D intro sequence - similarities to Playtech's historical comedy slot, VikingMania, are immediately obvious - that sets the tone for the game.

So, as we get to the reels, we here plenty of classical music, French accents that look like they've slipped out of a sitcom, plus Playtech's customary lush graphics and animation.

There are 50 paylines spread across the game's five reels, with plenty of resplendent royal symbols propping up the reels: jewels, crowns, pistols, gloves, royal decrees, cutlasses, and the Queen's Diamond itself.

Oh, and I've managed to get four paragraphs without mentioning our friendly Musketeers themselves, who all make an appearance: Athos, Porthos and Aramis.

Watch Out for the Wild!

The Wild symbol is the game's Wild and substitutes for all regular symbols. Although it only appears on the centre three reels - 2, 3 and 4 - and substitutes for everything other than the Musketeers and d'Artagnan, it does appear stacked for some nice wins.

If you were wondering how the various weapons on the screen played their part, you'll see when you match a Musketeer with his weapon of choice.

A mini-bonus round is triggered whenever you pair the three heroes up: matching Porthos to his sword on Reels 2, 3 and 5 sees our portly pal grab his sword from the reels and activates the 'Splendid Sword of Porthos' round: here, those reels will re-spin once, with one reel at random filled with lovely Wild symbols.

Match Athos with His Muskets to Trigger Random Wild Re-Spins

Matching Athos to his muskets on the first, second and fifth reels, meanwhile, triggers the 'Wild Muskets of Athos' round and earns you one re-spin, with random Wilds attached to the game.

Match Aramis with His Daggers to Trigger a Cash Prize

And finally, matching the cool dude Aramis with his daggers on Reels 3, 4 and 5 activates the 'Golden Daggers of Aramis' and bags you free cash.

However, hit all three Musketeers in a winning combo and you can enjoy multiple features – so there are three chances to win big.

Free spins can be won if you hit at least one Free Games icon on the first and fifth reels at the same time. As the Free Games icons come stacked, this can be easier than it sounds. And the more Free Games Scatters you land, the more spins you win: 3 spins can be bagged for each Scatter you activated the round with. (So with stacked icons, you could be looking at 24 spins straight away.)

Finally, our young buck d'Artagnan will activate 'The Queen's Diamond Bonus' when landing anywhere on Reels 2 and 4.

A more substantial bonus round - but no less exciting - sees our hero have to make his way through a series of missions to get into the castle and rescue the - you guessed it - Queen's diamond.

Essentially it's an elaborate Pick 'em/Trail Bonus, with five stages to get through: Pick a drawbridge to cross, pick a catapult to get you over the castle walls, and so on.

Make it through the early stages and you'll find yourself presented with three treasure chests to pick from. Choose right and you get the diamond - and the big bucks.

Along the way you will lose - or gain - extra lives; the more you get, the higher your prize multiplier at the end, so this can prove quite lucrative. In fact, collect all the hearts and you will earn a 7x multiplier on all bonus round wins.

There's no doubt Playtech are onto a winner here with Three Musketeers… The bonus rounds are really engaging, and with four rows in the base game and Stacked icons to boot, there's a real chance of some juicy extra wins.

Playtech's VikingMania may push it in the cuteness stakes, and is a worthy alternative for sure, but if you're interested in what kind of thing Playtech are forging ahead with at the moment, check out their summer-themed Sunset Beach too.