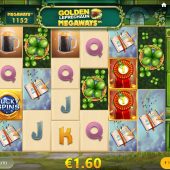 Golden Leprechaun Megaways slot by Red Tiger is their fourth version using the Big Time Gaming Megaways license. We've seen the very good Dragon's Fire Megaways, their first edition of Mystery Reels Megaways and finally the bespoke game for the famous bookmaker, Paddy Power Gold Megaways.  Being that as I type this there are now 40 Megaways games released, it seems that originality has been exhausted so let's hope there's something a bit different here.  We do get a rather beautifully created background of a peaceful woodland glade with the reels set in a country house and then the peace is shattered by generic pipe-and-fiddle Irish music as we spin.  So can this latest slotting leprechaun make our bankroll golden, or not?

There is the standard and classic Megaways arrangement here of 6 reels of 2 to 7 rows each on a random basis, giving us 64 to 117,649 ways to win rather than a minimum 324 ways because there is no scrolling line of 4 tiles above or below the centre reels.  Symbols can appear stacked and singly on Golden Leprechaun Megaways slot as you'd expect and the 6-of-a-kind pays are 50x Rosette, 7.5x Clover, 2x Diary or Beer with five card value of 1.8 down to 0.8x for a full way.  There is a Lucky Spins scatter but no Wild as of yet because we know Red Tiger love to keep the goodies until bonuses hit and during any spin we can get random Leprechaun modifiers as described in the free spins section below.

So 3 Lucky Spins scatters will get you 10 free games with the usual increasing multiplier in play for each winning action.  You get 5 extra spins for any 3 scatters during them and before we start there is a Lucky Mushroom to choose from 3.  You will get 1 of 3 enhancements in play which will occur usually at least twice in the 10 spins.  The green vortex will appear from the top of the reels where the little Leprechaun resides if you are getting the modifier.
Random Wilds - 3 to 5 single Wild tiles are added to the grid after a spin.
Wild Stacks - 1 to 4 Rainbow Wild reels can be added to the grid anywhere with a 2 to 7x multiplier on each.
Lucky Line - a combination of 3 or more Clover-surrounded tiles from reel 1 is created which reveal a similar symbol for a guaranteed win.

Golden Leprechaun Megaways slot is quite good fun and Red Tiger claim a maximum win of 10,000x bet but I suspect you'd need a base game spin or free games spin using the Wild Stacks feature and get 4 reels of high multiplier in conjunction with the top symbol to see that.  The base game only really pays anything of note when the random modifiers kick in although we get a reasonable 96.00% RTP here.  The graphics and animations are decent enough but the soundtrack does get rather tiring eventually.  I wouldn't though rule out another visit to the Golden Leprechaun despite the game being pretty average in comparison to other Megaways games...