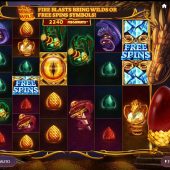 Dragon's Fire Megaways slot by Red Tiger is their third Megaways game after Mystery reels Megaways and the bookmaker-exclusive Paddy Power Gold Megaways. The game is simply a version of the original Dragon's Fire slot so we have a similar appearance with the reels surrounded by a giant dragon residing in a dark cave full of gold treasure. We have some powerful dramatic music and sound effects here with the dragon very active during the play when wins appear. So will this dragon set fire to our bankroll or will there really be many ways to leave this cave ahead?

On The Reels...
The standard format for Megaways is applied here with 2 to 7 rows on each of 6 reels so 64 to 117,649 ways to win each spin. The winning symbols don't disappear on Dragon's Fire Megaways slot in the base game though and you don't get the scrolling reel of 4 symbols either. The Dragon Eye can appear stacked or singly and pays 50x bet for a 6-of-a-kind win, then Gold Dragon 5x, Red 2.5x, Green 1.8x, Blue 1.6x and there are the same 4 colours for the low-pays in the form of Eggs paying 1x down to 0.5 for a full way of 6 symbols. There are now standard Wilds but there is a free spins scatter, however before we get to the free games, there's a few things the Dragon here can spring on us first.

Modifiers
In-play each consecutive spin which produces a win increases the multiplier displayed in the Egg on the right, fiercely guarded by the Dragon. There is a maximum of 50x but it resets back to one when you do get a losing spin. The Dragon may randomly increase that mutliplier by up to 10x during any spin too. He may also give us extra scatters by placing one each on the outside 2 reels and slow-spinning the middle 4 for an increased chance or even breathing one onto the grid when 2 came in during a normal spin. The final bit of fire here is the Dragon breathing fire onto the reels to randomly place extra Wilds or even a reel or two of Wilds.

Free Games
We only need 3 scatters but this time the winning tiles actually do get removed for more to cascade down from above. We have the Bonanza-style increasing multiplier for each winning action too. The free games are from picks so you can say 8, 12 or 20 and you'll see more random modifiers - usually. There can be retriggers where you pick from 3 Eggs again and you begin the free spins at whatever multiplier is in play from the base game when triggered and likewise the next base game spin after the bonus retains the multiplier accrued. You can win up to 10,000x bet according to Red Tiger.

Our View...
Dragon's Fire Megaways slot is superb for graphics and sound effects but especially so for the animations during the random features and bonus. The base game multiplier is a nice addition and the random multiplier increase can produce some good hits. It's not easy though to get massive totals in the free games and if you do it will be one fluky spin as opposed to a generally great and exciting build-up. The RTP is on the slightly low side for Megaways games at 95.72% but as with most Red Tiger slots you do tend to get a good turnover for your money. If you want a Megaways slot to fire your money into, this could well be the one...