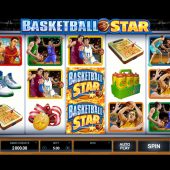 Basketball Star is a rather disappointing clone of Football Star Cricket Star and Rugby Star. I couldn't tell you which one came first, that is how uninspired I am in these games. They were all largely released just before major sporting events linked to the game.

The games feature give you a chance to pick up 25 free spins with up to a 10x multiplier. Other than that the game has a fairly simple game mechanic which tends to get very boring after a fairly short space of time. Their aren't too many basketball-themed slots out there, which is possibly largely to do with the near closing of the US online gaming market since 2006.

If you like sports-related slots then you might want to check out Playtech Football Fans or Play'n Go's Gold Trophy 2, both of which are very good games.