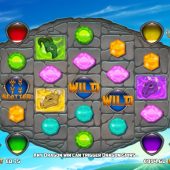 Dragon Wins slot was a surprise to me when I saw it, as first impressions led me to think it was from Microgaming or Netent due to the cartoon imagery and children's story type of theme, something not usually associated with Nextgen. The odd format of the stone reels and background of islands in the sky also foxed me as I assumed it to be a 720-way game like Pollen Party or Hexbreaker 2, but again I was wrong! We have a fixed-line game with icons of Dragons or Gems and play to a soundtrack of soft classical music punctuated by odd noises from the four Dragons waiting by each corner of the reels. These have an important role to play later, but as the title suggests, can these odd Dragons really give us some decent wins?

The grid has the 3-4-5-4-3 row format usually associated with 720-way slots, but here we have just the 40 fixed paying lines instead. Icons are single although more than one can appear on a reel and we get two types - Dragons of which the Orange pays 10x bet for 5-of-a-kind, Yellow 6x, Green or Purple 4x. Gems are Blue, Pink or Green which pay 2x and finally Orange or Blue pay 1x your 25-coin bet for a full line. There are single Wilds on all reels offering the premium prize of 20x but if you triggered the free games with all 5 scatters you would be granted a scorching 80x!

Before we get to the triggered bonus, there are 4 different mini-bonuses triggered cumulatively. Any wins involving the 4 coloured Dragons will fill their respective pots which when full trigger in all cases a 3-spin mini bonus. This is similar to how the meters fill if you've ever played Yggdrasil's Vikings Go Berzerk game. So if when you fill the pots, the mechanic is thus:

Red Dragon - these become stacked on all reels and the standard blue scatter is replaced by a red one which will retrigger the 3 spins if 3 or more appear.

Yellow Dragon - all dragons on the reels now become Yellow too plsu after each spin one colour of gem present may change also to Yellow Dragons. The scatters are now yellow too and 3 or more awards 3 more spins.

Green Dragon - all dragons become green on the reels and each spin 1 to 3 of the three centre reels will contain only Green Dragons. Scatters are now green and 3 or more awards a retrigger of the 3 spins.

Three or more standard scatters in the base game will trigger one of two different free spins features:

More Wilds Free Games - 10 to 15 free games during which after each some random positions are transformed into Wilds. You may also retrigger this round.

Wild Reels Free Games - 5 to 10 free games are awarded where on each spin up to 3 reels from the centre three will become Wild reels. Again, retriggers possible.

We aren't finished yet as in both the base game and free games when a Dragon win occurs its respective Dragon may breathe fire to repeat its win 3, 5 or 10 times!

Dragon Wins slot has certainly got an imaginative and novel mechanic with Nextgen thinking outside the box for sure, even if the theme is a trifle childish for today's slotting climate. It's not particularly advanced as far as graphics or animations are concerned and has a reasonable (although lower than most Nextgen slots) RTP of 95.35%. The variance is quite low though and although full of action most bonus rounds of all types seldom yield more than 30x bet although the potential is there for far bigger wins. I cannot fault the entertainment value of the game, even if I would personally rename the slot 'Dragon (little) Wins...