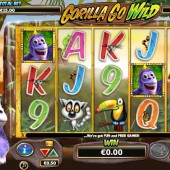 There are a few things in this world that humans will only find annoying if they are evil to the very core. These things include kittens, new born babies, penguins, and monkeys. In the term monkeys, I also include those big cuddly beasts that are gorillas. The whizz kids at WMS Gaming knew it was a market to tap into when they launched Gorilla Chief 2 and slots developer Cryptologic knew it was a worthwhile investment when they released a King Kong slot.

Now it is the turn of those busy bees at NextGen Gaming. Gorilla Go Wild is a 5 reel, 25 payline slot that focuses on the actions of a loveable little gorilla chap called Gary. Let's be honest, Gary is not exactly the first name that springs to mind when you think of a gorilla but we'll go with it.

Symbols on the reels include a gold coin, cheeky little monkey, a ring-tailed lemur, a toucan, and the regular 9-throught-to-Ace icons. The Wild is represented by Gary himself and substitutes for all other symbols, except for the Scatters, to complete potential winning combinations on the reels. Gary sits to the left hand side of the reels and watches as you spin in the hope of collecting bananas and getting big wins.

Yes, that's right, I just said collecting bananas. From the very start, NextGen Gaming make it known that this is a slot that rewards you for your commitment to playing. Many social-based games these days are using achievements and rewards to prolong player engagement and it appears NextGen are following that path with this latest title. The general set up of this slot is in the form of Gary the Gorilla's Feature Kingdom. This feature is triggered if you hit three or more temple Scatters across the reels.

The second Feature Kingdom available to play is the Stay Wild Bonus. Once again, 10 free spins awarded, although these do not bring guaranteed wins. However, any Wild that pops up on the reels during the free spins will remain as a Sticky Wild for the remaining free spins. This bonus feature can be re-triggered once and Gary also has the power to randomly re-trigger this bonus feature if he so chooses.

The fourth and final Feature Kingdom game is the More Wilds Bonus. As expected, 10 free spins are awarded and on each spin up to three symbols, except the Scatters, will turn Wild. This can lead to some decent pay outs. As standard on this slot, the bonus feature can be re-triggered once and Gary can randomly re-trigger it himself if he's in that kind of mood.

There is also Gary's Bonus Time. Careful how you say that. This is a randomly triggered bonus feature that is awarded after any regular spin. It is possible to either win a cash prize of the value up to 1,000x your total bet or gain entry into Gary the Gorilla's Feature Kingdom. The more bananas you collect with Gary during your play time, the more frequently he will randomly trigger his Bonus Time.

I've always had a soft spot for NextGen Gaming slots. The exquisite Medusa slot and the solid comic book Judge Dredd slot are just two titles I've played over and over again. I am pleased to say that this slot is one I will definitely be coming back more to play. The requirement of collecting bananas on every spin to improve the bonus features is a fantastic idea and it will have players coming back for more. 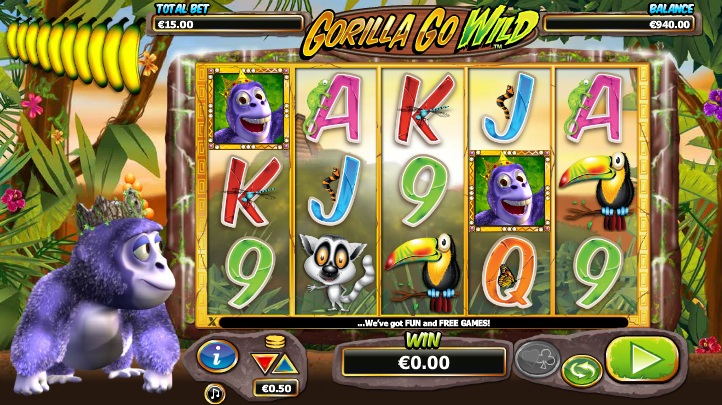