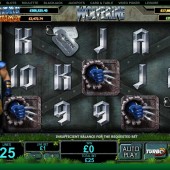 If you enjoyed the various cinema outings for everyone's favorite bugger-chopped indestructible hero, Wolverine, and want to know a little more about the walking sideburn’s back story, check out slot developer Playtech's Marvel Comics tie-in slot based on the X-Men character.

Following in a long line of top-notch superhero-themed games from the leading developer like the visually-stunning Iron Man 2 and the underrated Incredible Hulk, Wolverine is a similar kettle of fish - or should that be kennel of dogs - as you assume the role of the muscly Marine in his war against the bad guys.

It’s a 5-reel, 25-payline slot, with a max coin bet of $5.00, but Playtech love to be all-inclusive when it comes to their hero slots, and bettors on the $0.01 per coin bankroll are catered for here.

On the reels, meanwhile, are all manner of imagery from the comic books (not the film, I should add), with nicely hand-drawn Wolverine slashes, syringes filled with Adamantium (the metal that gives Wolverine his strength), Logan’s dog tags, his DNA strand, and standard 9-through-Ace symbols.

The Wilds are where the game starts to get interesting. The ‘Wolverine’ symbols appear on all reels, but comes in three different versions: a single symbol, a symbol covering two spots, and a final Wild that covers a whole reel.

All Wilds, regardless of size, substitute for all other symbols except the Scatter, in this case the syringe packed with the vital adamantium that will bag you 12 free spins.

These are no ordinary free spins, however: during the free spins you’ll see a syringe to the left of the screen, numbered from 0 to 12. Keep hitting syringe symbols and the graphic starts to fill with adamantium.

Fill the syringe and you’ll unlock Wilds on the reels for your next spin. Hit enough Wilds and you could end up not only with a screen full of Wilds, but a bulging bank balance too!

Finally, look out for the Berserker symbol. If you hit it at the top of reel 5 you’ll win some randomly-assigned Wilds across the reels for a spin. Hit it on the middle square and you’ll earn 3-5 random Wilds, and stop it on the bottom square of reel 5 to win two Stacked Wilds.

If a tonne of free spin action and Wilds galore weren’t enough, however, there’s also a Marvel slots jackpot to be won. Four jackpots of varying amounts will be randomly triggered during the base game.

If you also can't get enough of Wolverine then he also makes an appearance in the popular X-Men slot from Playtech. Games don’t come bigger than superhero-themed slots, and while the other Marvel games are worth checking out, don’t dismiss Cryptologic’s rival DC Comics-based slots like the exciting Superman slot and the iconic Wonder Woman slot.

Their bonus features may not quite reach the heights of Wolverine, but they’re worth playing for anyone remotely interested in comic books. Load up the bankroll and go for the big wins! 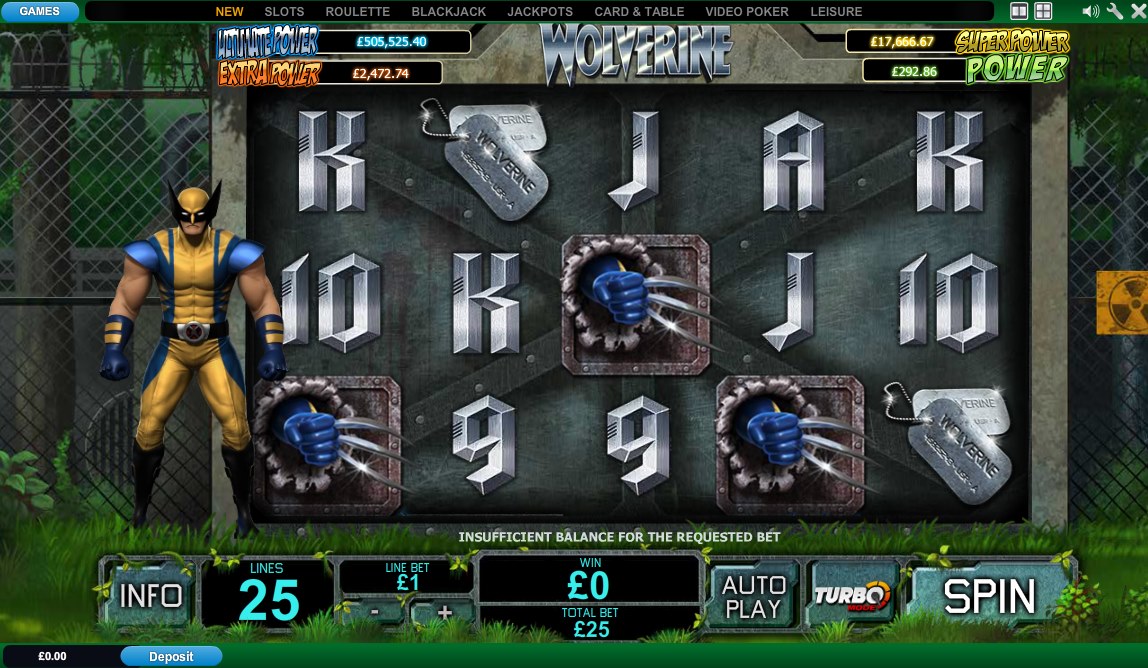