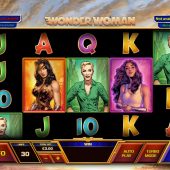 Wonder Woman slot is an addition to the DC Comics series of games by Playtech which thus far have included The Justice League and Aquaman to name but two. If you've been around slotting long enough, you may recall the original slot of the same name by Amaya/Cryptologic although the most recent was the awful Bally one, Wonder Woman - Bullets and Bracelets. There's no need to detail the theme too much here other than the reels sit against an artistic backdrop of her fantasy world and we have sounds and music from the series itself. There's quite a bit to this slot, so can we save our bankroll from the clutches of Wonder Woman's evil enemies?

There are five reels of 4 rows each and we have 30 fixed paying lines. Card values and the WW Wilds appear stacked and the character symbols appear in 2-row pairs. The Wilds pay 250 coins for your 30-coin stake, The Cheetah 150, Aries 100, Wonder Woman 70, Diana 50, Barbara 30 and Steve 20. Your five card values are 16, 12 or 10 coins. The scatters here are in the form of Wonder Woman facing Cheetah and only appear on reels 1 and 5. Now Playtech seldom waste licensed themes on games with little going on, and that's certainly the case here.

You may find a single Fire Wild in the form of a burning standard WW Wild land on the centre reel. When it does, all instances of one high win symbol present on the grid will also turn Wild.

Wonder Woman may appear in her full 2-row height on reels 1 and 5. You then get a series of respins with only blanks and Wonder Woman on the grid. You respin until nor more of her are added. You get a pay according to a scale, from 2x for 4 of the 20 possible positions filled, to 1000x bet for the whole grid!

If Barbara, the Green Character, appears in full on reels 1 and 5 you will find that all picture symbols turn to the highest one, The Cheetah. You may or may not get a win.

For these you need the full Wonder Woman and Cheetah scatter on reels 1 and 5. You will be randomly awarded one of three possible free game formats. In all cases you start with 12 free spins, in all cases you get 3 extra spins for one full scatter in view or a retrigger of 12 for both scatters.

Wonder Woman Free Spins - one random symbol is chosen to be super-stacked each spin and it's either 10, Q, A, Sreve, Diana or Aries.

The Cheetah Free Spins - any higher pay character symbols involved in a win are turned into The Cheetah on the reels for remaining spins. You also get 1 extra spin if your last free spin produces a win.

Fire Wild free Spins - the Fire Wild now appears on all 3 centre reels instead of the third reel only. Landing 1,2 or all 3 Fire Wilds in view will turn either 1,2 or 3 picture symbols into Wilds.

Wonder Woman slot is colourful and has great animations when any features or modifiers occur. These features do occur with reasonable frequency too to keep you entertained while waiting for the free games trigger. You have the DC Jackpots too but these are 0.99% of the not great 95.34%, which is something to consider. The second negative is the maximum pay for a full screen of Wilds, only 250x bet so this tells you much about the low volatility and win potential of Wonder Woman slot. It's fine entertainment-wise but as players we do like to win sometimes instead of just paying for a bit of fun with little chance of a profit. So myself, I need not wonder if I will ever visit this famous woman again...